Create an Account - Increase your productivity, customize your experience, and engage in information you care about.

Field notes assembled and collected from the references indicated at the end of this page are by Robert Stockwell, former County Manager. January 2002 information is by  Stella Davis, former Carlsbad Current-Argus writer and County Commissioner, who references Bob Stockwell as her source.

Eddy County Commissioners met and set the date for going over plans and specifications for a new courthouse and jail. (20) 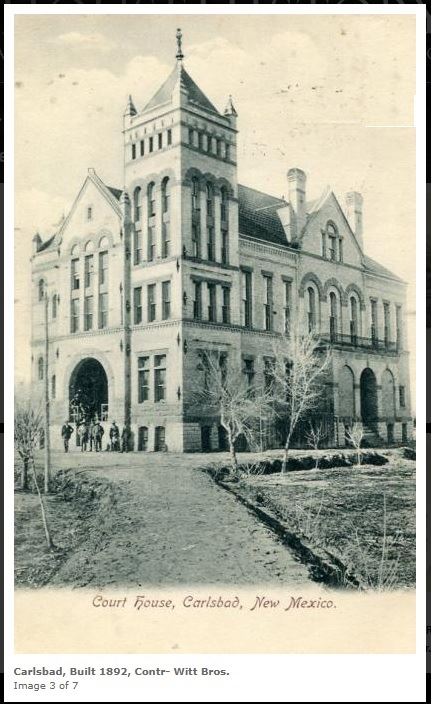 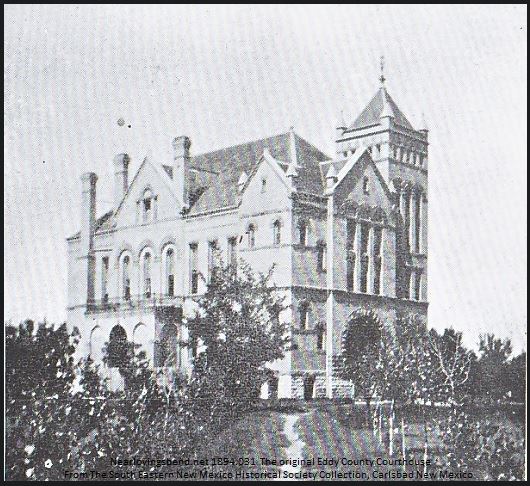 County Commissioners met and set the maximum amount of $30,000 for a new courthouse and jail, to include architect fees. (21,132)

The Witt Brothers and the Pauley Jail Building Manufacturing Company received the contract to build the courthouse and jail. The exterior was to be of dark brick, made locally. The courthouse maximum cost was set by the commissioners at $30,000 and was a bond issue. Although the contract was let on this day, the Commissioners could not agree on a location. (1)

Although the commissioners still could not settle on a site for the courthouse, they accepted a deed to all of Block "3" from Mr. C.B. Eddy, President of the Pecos Valley Town Company. The land is where the courthouse stands today, 100 North Canal Street, Carlsbad, NM. There was no cost to the county for this land. (1, 6, 33)

Construction began on the courthouse. The Witt Brothers got the bid to build. (1) Cost was $21,000 for the courthouse portion of the wing. The courthouse was to be the 1891 Victorian Style. (5)


County officials moved into the new courthouse. There were already prisoners in its jail. (1)

The County Commission discussed the building of a new jail, which had been recommended by the district judge and several recent grand juries. The motion carried by 2 to 1 to proceed with the idea of building a new county jail. (138)

The Commission met to consider bids for the building of a new jail. No positive action was taken at this meeting. (139)


The Commission voted to appropriate funds for a bandstand to be built on the courthouse lawn in the amount of $70. (40) On Sunday afternoons, citizens would gather on the lawn to hear music from local musicians or the fire department band. (8)


The Commission approved the contract with Carlsbad Plumbing Company to hook up all plumbing, sewer and sanitation lines for the courthouse and jail. (125)

A contract was awarded to Campbell Brothers for the construction of an "East Wing" for $38,212. The exterior of the new addition was a lighter colored brick designed with more modern architectural features. The ornate window treatment and the steeple effect were eliminated from the East Wing addition. (2, 233)


The Commission approved an offer by The Public Utility Company to install electric lights in the new East Wing. (236)

The Commission approved a bid by Barry Engineering Co of El Paso for $2,457 to do the plumbing and heating for the East Wing. (238)

The Commission voted an additional $621 to have a smoke stack put on the courthouse. (239) 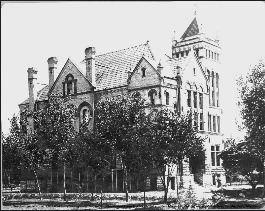 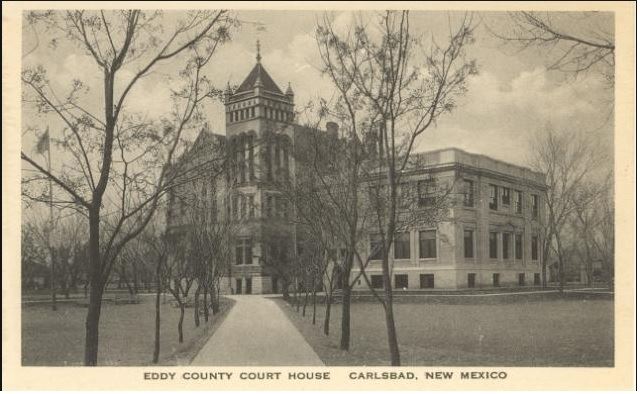 April 6, 1938
The Commission approved the sale and removal of salvage of the old east wing of the courthouse and jail to Arnold Transfer Co of Carlsbad for $299. (54) 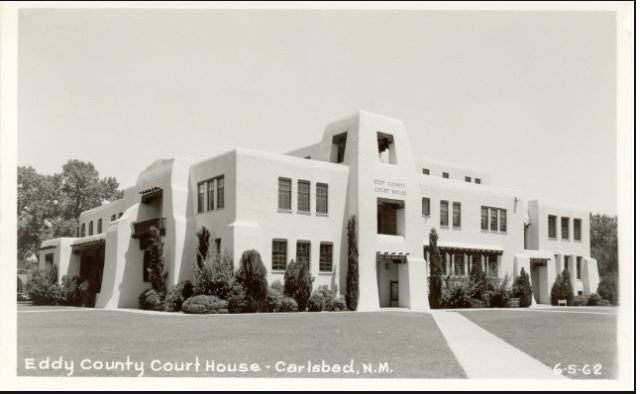 The County entered into an agreement with the Federal Emergency Administration of Public Works, known as the W.P.A., to remodel the courthouse and jail. (55) WPA said it would provide up to $112,500 providing they approved all plans and expenditures. (3)

A motion was passed to pay Architect R.W. Vorhees extra compensation for extra work on the courthouse plans, as he changed the plans from the original plans to a Santa Fe style building. The Lembke Construction Co of Albuquerque, NM, was awarded the contract, which entailed the use of W.P.A. labor. The construction cost was $184,000. (57)

The commission approved a change order authorizing terrazzo floors - instead of the original cement floors - in several areas of the courthouse, including the Justice of the Peace Office. Throughout the construction process, numerous change orders were approved. Among the changes was a 15-bed dormitory built on the fourth floor for court juries. (3)

This alteration converted the structure to early Spanish architecture. This project was completed on November 6, 1939. The 1891 Victorian style portion of the County Courthouse was removed during this 1939 remodeling. (2, 6)

In the 1940s, cattle brands of the regions and county were etched onto the west door of the courthouse. (3)

In 1953, an air conditioning system was installed in the courthouse and jail for $28,100. By the end of the decade, a 90mm aircraft gun was installed on the south lawn to commemorate county residents lost in battle. (3)

The commission gave its approval for the US Border Patrol to occupy office space in the courthouse. That same year, local architect Art Gorrell and Miles Brittle met with the commission to present final specifications for the construction of a juvenile detention center wing to be added to the north side of the east wing of the facility. (3)

The new juvenile wing was completed by Paul Bates Construction Company with a bid of $52,300. That same year, an elevator was installed for a cost of $11,823. (3)

New Mexico State Police moved into renovated offices that had formerly served as the Sheriff's garage. The US Border Patrol was asked to move out. (3)

The county's Civil Defense Director asked for more office space and was given the US Border Patrol's previous space, but had to share it with US Veterans Service two days a week. (3)

The $448,644 project was completed. Funding for the renovation came from a Law Enforcement Assistance Administration grant and US General Revenue Sharing Funds. (3)

The commission approved the remodelling of the old health office following their moving to new quarters on West Stevens Street. Administration personnel filled the vacated offices. (3)

Fifth Judicial District Judge Harvey Fort moved his office to the 4th floor of the courthouse, which had recently been occupied by the district attorney. (3)

The County Commission asked then-Sheriff Tom Granger to vacate the sheriff's family living quarters in the courthouse basement. Over the years, the family quarters had been home to a number of sheriffs and their families. The county retained the kitchen area in order to continue feeding prisoners in the jail upstairs. (3)

The county installed a new air conditioner compressor, a new roof, a minor remodelling of the sheriff's offices, and exterior work on the building. (3)

The county moved the law library out to the Jackson Building at 302 N Main Street. (3)

The commission awarded the low bid of $178,677 to Courson Construction to remodel the second and third floors. The Court Clerk moved to the second floor and the County Treasurer moved to the former law library in the basement. A new office for a second judge was created on the third floor, along with a conference room for attorneys and their clients. A holding cell for prisoners was also created. The judges' offices were moved from the 4th floor to the new offices on the 3rd floor. The Juvenile Probation Officer moved from the basement to the fourth floor. (3)

With more computerisation in the courthouse, the commission approved running additional and larger electrical outlets to the south side of the courthouse. (3)

By 1993, it became evident to county officials that the old, dark jail was not meeting the county's needs. If the county continued to drag its feet in addressing the jail conditions, it faced a strong possibility that the federal government would step in and order the county to build a new jail at a prohibitive cost. The County Commission hired H.B. Construction of Albuquerque built a new jail across the street at a cost of $2.6 million. The commission hired the same construction company to build new sheriff's offices next to the jail for $768,416. (3)

Durham and Associates were hired to provide schematic designs and design development for the old vacated jail in the west wing of the courthouse. Durham gave a replacement cost estimate of $5.6 million and a renovation cost of $2.6 million.
In the November 1995 General Election, the county put a bond issue on the ballot that would have generated the needed income to pay for the remodelling. The measure failed by a vote of 9,129 against and 6,173 for. (3)

The county made another attempt to get the bond for the remodelling passed. This time the initiative was successful, and renovation of the courthouse began in 2001. (3)

The remodelling was completed. Americans with Disabilities Act (ADA) compliance was resolved as well as upgrading plumbing, electricity and heating/air conditioning. Another courtroom and a secured, north entrance was added. A water well, discovered under the parking lot, was converted to a Pueblo-styled portico with a simulated river. This area was named Pioneer Plaza. Engraved pavers with pioneer family names were cemented around perimeter of the Plaza.

The Bill Mitchell and Beauford families donated an 1892 red sandstone cornerstone acquired during demolition in 1938 and salvaged by their grandfather, Leonard Beauford. The cornerstone was permanently affixed to the cement floor in the Plaza near the northeast wall.

The Carlsbad Sheriff staff moved out of the basement (first floor) to a new Sheriff Complex near the Airport at 1502 Corrales Drive, leaving the offices vacant.


The Eddy County DWI Program staff moved into the basement (first floor) offices, formerly housing the Carlsbad Sheriff. This will allow Eddy County the option to sell the building at 401 S. Main St. where the program was formerly located. 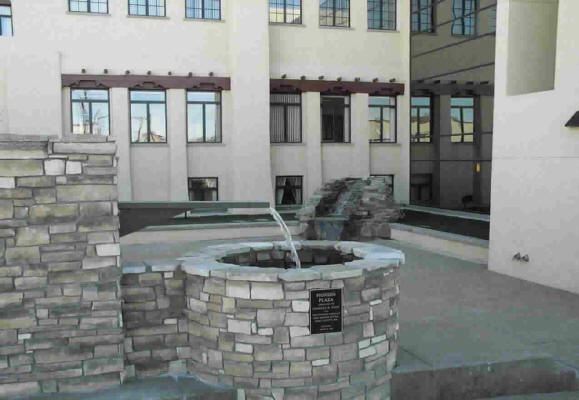 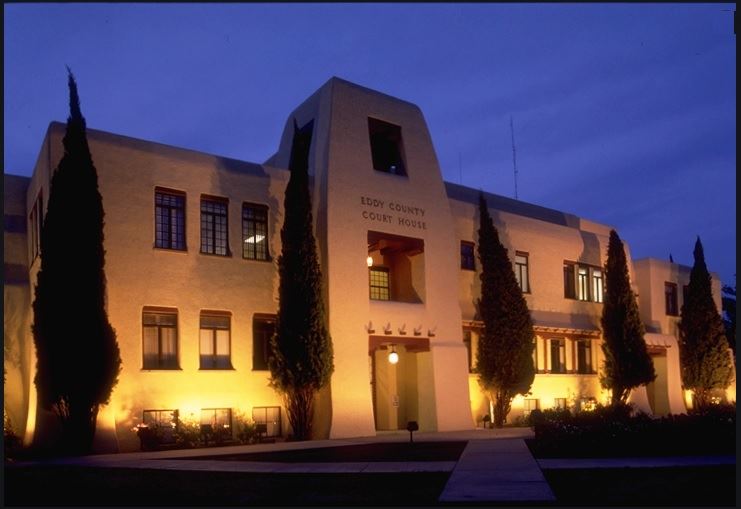